Was Jesus born in a barn?

The popular imagining of the first Christmas, with innkeepers putting up ‘house full’ signs and finally pointing Joseph and Mary to an animal shed out the back, is unlikely to be the way it all happened.

Dr Lynn Cohick, Professor of New Testament at Wheaton College, spoke at St Paul’s last Sunday, and pointed out 3 reasons why that popular view of the first Christmas is unlikely:

1. In Middle Eastern culture, there is no way that a town would have not looked after one of their own, let alone a couple expecting a baby. The residents of the town would have done everything they could to accommodate the couple, out of hospitality, and for the honour of their town.

2. Bethlehem did not have hotels as we understand them. Instead, those who could afford them would build a ‘guest room’. The word in Luke’s gospel translated ‘inn’ (katalyma) is elsewhere translated in Luke as ‘upper room’- it was all of these ‘guest rooms’ that were full in the Christmas narrative.

3. Homes in Bethlehem were divided into 2 rooms: one for living/ cooing/ sleeping, and another for the animals. This is similar to modern day Masai homes which have a similar design. Animals were kept inside at night for their welfare and for security. 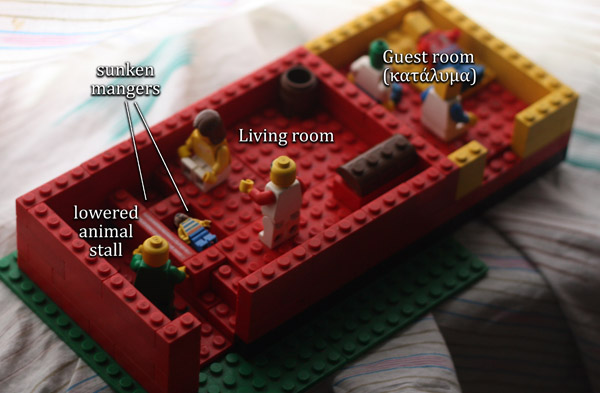 Joseph and Mary stayed with another peasant family, who had no room in their normal living quarters or guests space, but accommodated them under the same roof in the best way they could.

Dr Cohick’s observations drew from Kenneth Bailey’s work on understanding Jesus through aide Eastern eyes – you can read some of his work on the Luke Christmas passages here.

2 responses to “Was Jesus born in a barn?”